American football evolved from rugby, which was a spin-off from soccer. Early roots of the modern game can be traced to a college game played in 1869 between Princeton and Rutgers universities. Each team had 25 men on the field;  the game more resembled soccer then football, as running with the ball, passing and tackling were not allowed. Harvard and McGill universities played a game in 1874 that combined elements of rugby and soccer’ this game caught on in eastern U.S. schools and developed into the beginnings of modern football
Early rules included playing with a round ball and needing to make 5 yards in three downs. Rules have continually evolved to make the game fair, exciting, and less violent. From its beginnings in America on college campuses, football has grown into a widely popular sport in the United States, where it is played in youth leagues, in high schools, and professionally. Football games are played all over the world, although it is not a great spectator sport outside the United States. There is a National Football League (NFL)  Europe league, made up mostly of American  players, with rules basically the same as in the NFL in the United States.
Flag Football is believed to have begun in the U.S. military during World War II. The game was started for military personal to play without getting injury during wartime. It is believed that the history of flag football was first recorded at Fort Meade, Maryland and it is generally accepted as its birthplace. Local leagues were formed as military personal returned home in the 1950s and 1960s. It is still played throughout the United States at the middle school, high school and college level. Many cities have developed their own adult flag football leagues.
In 1933 Flag Football was Entered in the Webster Dictionary as Touch Football. Later in 1954 it was changed back to Flag Football.

The game allows players to participate in a relatively safe situation while still retaining many of the skills used in football. The rules for touch football and flag  football are generally the same. However, when playing flag football, the rules for blocking, fumbling, and tackling must be strictly enforced. In flag football, any ball carrier without two flags is considered tackled. In order to minimize hazardous play, the following precautionary measures are suggested:

· No blocking, tackling, or holding the ball carrier.

· Defensive players must maintain contact with the ground. Ball carriers may not employ straight-arm or body contact.

GAME
• At the start of each game, captains from both teams meet at midfield for the coin toss to determine who starts with the ball. The visiting team calls the toss.
• The winner of the coin toss has the choice to take offense or defense. The loser of the coin toss chooses which direction it will be defend. There is no option to defer to second half.
• The offensive team takes possession of the ball at its 5-yard line and has three (3) plays to cross midfield. Once a team crosses midfield, it has (3) plays to score a touchdown.
• If the offense fails to cross midfield or fails to score, the ball changes possession, and the new offensive team takes over on its own 5-yard line.
• All possession changes except interceptions start on the offense’s 5-yard line. • Team change sides after the first half. Possession changes to the team that started the game on defense.
SCORING
Touchdown: 6 points
• Safety: 2 points
• Extra point: 1 point (from 5-yard line) OR 2 points (from 10-yard line)
• Overtime winner: Add 1 or 2 points to winning team’s score which is determined on their FINAL position and if they scored from 5 or 10-yard line.
PENALTIES

5-yard Penalty Infractions: (Taken from the line of scrimmage)
· Off side
· Illegal forward pass
· Less than 3 players on the line of scrimmage
15-yard Penalty Infractions: (taken from the spot of the foul)
· Illegal use of hands
· Illegal block
· Unnecessary roughness; pushing, tackling, shoving, tripping, and holding
· Unsportsmanlike conduct
· Pass interference
Fumbled Ball
· A fumbled ball at any time is considered a dead ball and belongs to the team that committed the fumble.
· The down and point to be gained remains the same.
· A fumbled forward pass is ruled as an incomplete pass.
Downed Ball
· In Flag football, the ball is downed or the player is tackled when one flag is detached from the belt or the ball carrier loses his or her flag.

Grip
· Hold the ball slightly behind the middle with two or three fingers across the laces.
· Fingers and the thumb should be relaxed and well spread without the palm touching the ball.
· The index finger may extend toward the point of the ball. (Optional) 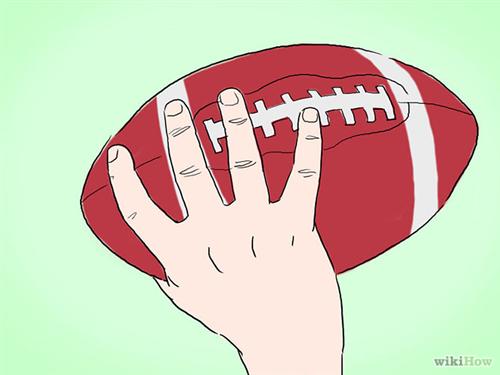 Passing
· Raise the ball toward the throwing shoulder with both hands, parallel to the ground.
· As the throwing motion begins the thrower should take a large stride, with the foot opposite the throwing arm, towards the target. If throwing to a moving  player the stride should go towards where the receiver will be.
· As the step begins, the shoulders should be turned away from the target in a coiling motion, while the ball moves away from the direction of the throw.
· The forward motion begins with the elbow leading to the target, ball directly over the shoulder in a sharp downward motion and the thumb rotating towards the knees.
· Weight is shifted forward to the front foot
· The throwing hand should finish across the body over the opposite knee.

Centering/Hiking the ball
· Centering is like a forward pass, but upside down
· Hold the ball on the ground with the dominant hand.
· Place your fingers on the laces. Use the non-dominant hand to guide the ball, if necessary.
· Spread the feet wider than shoulder-width, knees bent, looking forward.

PASSING
• All passes must be forward and must be received beyond the line of scrimmage(LOS). Only one (1) forward pass per play.

• Absolutely NO laterals, pitches pr screen passes of any kin

d are allowed behind or beyond the LOS.
• Shovel passes are allowed but must be received beyond the LOS. • The quarterback has seven(7) seconds to throw the ball.
• If a pass is not thrown within the seven(7) seconds, the play is whistled dead and it’s a loss of down. (Treat it like an incomplete pass). • Once the ball is handed off, there is no seven(7) second rule.
• The referee will be verbally counting out the 7 seconds for the QB.
• If the QB’s flag is pulled before the ball leaves his or her hand, the play is ruled dead and the ball is spotted where the QB’s feet are.
• Interceptions may be returned except for during a PAT.
• If a pass is tipped/ blocked by the defender and the QB catches the ball, the play is whistled dead and considered an incomplete pass.
• The QB may throw the ball to avoid a sack. Pass must go beyond the LOS.
RECEIVING
• All players are eligible to receive a pass (including the QB if the ball has been handed off behind the LOS).
• Only one (1) player is allowed in motion at a time.
• A layer must have at least one foot in bounds when making a reception.
• Once the ball is advanced beyond the LOS, the current ball-carrier is the only player allowed to have possession of the ball until the play is dead.
• Once the ball is advanced beyond the LOS, the remaining offensive players cannot impede the defense from attempting to pull the offensive player’s flag. (No screening or blocking; no running next to the ball-carrier)
RUNNING
• The QB cannot run beyond the line of scrimmage with the ball.
• Only direct handoffs behind the line of scrimmage are permitted. Teams may perform multiple handoffs as long as they remain behind the LOS.
• The player who receives the handoff can throw the ball as long as he or she remains behind the line of scrimmage.
• The ball is spotted where the runner’s feet are when the flag is pulled, not where the ball is.
• Center sneak play is not allowed. The QB may not handoff the ball to the center on the first handoff of the play.

Ball: a regulation leather or rubber-coated football can be used. It is generally recommended that a small size football be used
Flags: flags should measure 12 to 15 inches in length and 2 inches in width. They can be made of plastic or cloth and can be tucked in the top of gym shorts or attached to a flag football belt. During game time all t-shirts are to be tucked in with flags attached on the outside.

1. Backs: players behind the line who usually handle the ball
2. Blockers: players who keep the defensive player from touching the ball carrier or quarterback.
3. Quarterback: the player who receives the snap and passes or hands off the ball.
4. Receivers: players who catch a throw from the quarterback.
5. Center: player who touches the ball first and hikes the ball.
6. Rushers: defensive players going after the quarterback.
7. Safety:  a defensive position, the furthest from the line of  scrimmage.
8. Line of Scrimmage: an imaginary line marking the position of the ball at the start of each play.
9. First Down: moving the ball a set distance in four tries or less results in more chances to move the ball.
10. Scoring: catching a ball or running across the goal line.
11. Pass pattern: the path each receiver runs to get open and make a catch.
12. Lateral: passing the ball backwards or sideways.
13. Fumbled Ball: a ball which is dropped by a player with out being downed by the defense.
14. Tackle: to remove the flags of the ball carrier.
15. Off Sides: when a player lines up on the wrong side of the ball.