“DISC GOLF” AS IT IS KNOWN TODAY BEGAN WITH “STEADY” ED HEADRICK, THE FATHER OF DISC GOLF, MODERN DAY DISC SPORTS AND THE DRIVING FORCE RESPONSIBLE FOR THE MODERN ERA OF FRISBEE SPORTS.

Disc Golf Association, (DGA)  was established in 1976 by Ed Headrick to form a new international sport and to promote the installation and use of disc golf courses around the world.
Headrick coined and trademarked the term “Disc Golf” after inventing and patenting the original Disc Pole Hole. Headrick had originally wanted to call his invention a Frisbee Pole Hole but ran into issues over the Frisbee trademarked belonging to Wham-O where he had served as Vice President. Later after founding Disc Golf Association and the Professional Disc Golf Association, Ed released the term disc golf from trademark restrictions in order to help grow the sport.
Prior to DGA, a precursor to the game of disc golf was played by a few devoted Frisbee players throwing Frisbees at carefully chosen “golf holes”… usually drinking fountains, fire hydrants, garbage cans and light poles and the rules were made up on the spot. It was during this time that competitive freestyle had reached a critical mass with frisbee tournaments composed of distinct freestyle skill events. Frisbee golf made its début at a couple of these events in 1974 and 1975 as side activities to the main events comprising of competitive freestyle, focused on trick throws and acrobatic catches. The huge potential of disc golf as a formal sport and recognized recreational activity did not become apparent until after Headrick installed the first permanent Disc Pole Hole course and disc golf moved from a fringe of the Frisbee Freestyle movement and into the mainstream and the disc golf revolution.
In 1974, Headrick approached the county of Los Angeles Park and Recreation Department with the idea of a permanent Disc Golf Course. Sy Greben, Director of the Park Planning Division saw the potential and Oak Grove Park was selected and approval was given to install the world’s first Disc Golf Course. Headrick and Mary Becker from the Park Planning Division designed and constructed the course with the county.
Modern day disc golf started in the late 60’s. The early frisbee golf courses were “object courses”, using anything from trees, trash cans, light poles, chicken wire baskets, pipes to fire hydrants as targets. The roots of the sport begin when “Steady” Ed Headrick designed the modern day Frisbee (US Patent 3,359,678, issued 1966) while working for Wham-O Toys back in the 60’s. Captivated by the flight and feeling of control he could master with the Frisbee, Ed saw potential for the disc well beyond what anyone had envisioned or imagined.
Ed Headrick was one of the main driving forces of early Frisbee sports. Headrick founded the International Frisbee Association, established the Junior Frisbee Championships, established and organized the World Frisbee Championship and went on to create and standardize the sport of Disc Golf.
The game was formalized when Headrick invented the first Disc Pole Hole™ catching device, consisting of 10 chains hanging in a parabolic shape over an upward opening basket, (US Patent 4,039,189, issued 1975). The Disc Pole Hole™ became the equivalent to ball golf’s “hole” and was installed in the first standardized target course (what was then known as Oak Grove Park Pasadena, California). Ed had said one of his many inspirations for the “Disc Pole Hole™” invention was so he and his buddies could get on with playing instead of arguing over whether someone actually had hit one of the objects in their make shift object courses.
nformation from https://discgolf.com

Disc golf drivers are designed for fast long-distance throws. Drivers are recognizable by their sharp, beveled edge and have most of their mass on the outer rim of the disc. Drivers are often divided into different categories such as maximum distance drivers, distance drivers, and fairway drivers. Drivers are a more advanced disc to throw when compared to mid-range discs and putters. Players new to disc golf may find that throwing a distance driver can be difficult.
Midrange discs are as their name implies the middle ground between putt and approach discs used for short shots and drivers used for distance and long fairway shots. Midrange discs are faster, more stable, and have a longer range than a putter. Midranges are great all-around utility discs that players will use for the majority of their shots. While advanced players often use midranges for many of their shots midrange discs are great discs for players just starting out.
Putt and Approach discs are designed to fly straight, predictably, and more with much control then midrange discs or drivers. Putters are typically used for short controlled shots or the final “putt” into the basket, although some players use them for short drives where trees or other obstacles come into play. 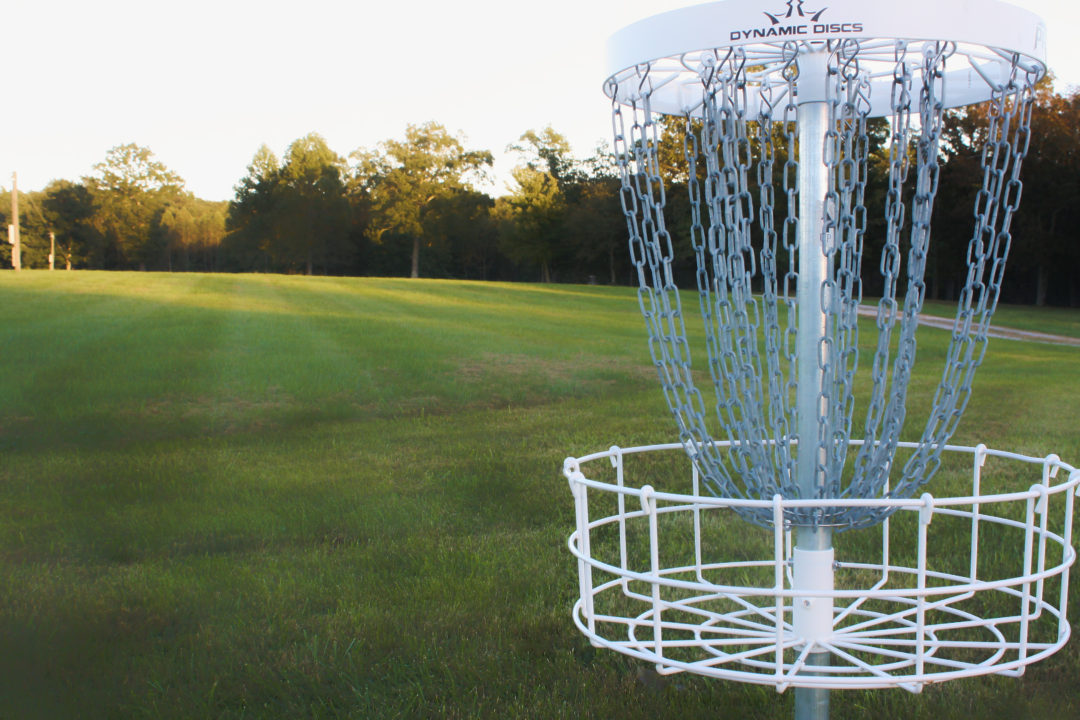 Objective of the Game
Disc Golf is played like traditional golf, but with disc golf discs instead of balls and clubs. One throw (stroke) is counted each time the disc is thrown and when a penalty is incurred. The goal is to play each hole in the fewest strokes possible. The player with the lowest total strokes for the entire course wins.
SAFETY FIRST
Never throw when players or other park users are within range. Always give park users the right of way. Be aware of your surroundings and environment at all times.
Tee Throws
Each hole begins with a tee throw. Tee throws must be completed within or behind the designated tee area.
Lie
The lie is the spot where the player’s previous throw has landed. Mark each lie with a mini marker disc or leave the thrown disc on the ground where it landed. The player’s subsequent throw is made from directly behind the marked lie.
Throwing Order
The player with the least amount of strokes on the previous hole is the first to tee off on the next hole. After all players have teed off, the player whose disc is farthest from the hole always throws first.
Fairway Throws
Fairway throws must be made from directly behind the lie. A run-up and normal follow-through, after release, is allowed, unless the lie is within 10 meters of the target. Any shot within 10 meters of the target requires that the player maintain balance and not move past the lie until the disc comes to rest.
Mandatory
A mandatory, or mando, is one or more designated trees or poles in the fairway that must be passed to the correct side as indicated by an arrow. If the disc passes to the wrong side of mandatory, either play from the previous lie or from a marked drop zone area if applicable and add a one throw penalty.
Completion Of Hole
A disc that comes to rest in the disc golf basket or suspended in the chains constitutes the successful completion of that hole.
Out Of Bounds
If any area of O.B. is visible between the disc and O.B. line, then the disc is considered O.B. A throw that lands out of bounds, must be played from a point up to 1 meter in bounds from where the disc crossed over the out of bounds line. Permanent water hazards, public roads, and most park boundaries are almost always out of bounds.
Information from https://discgolf.com

For example, if you are standing on the opposite side from your target with a small building, such as a restroom facility in your way, you may not want to have to incur extra strokes just to get around the obstruction, and still end up the same distance from the basket as you are at this moment. In this case, the overhand throw would benefit you well. Being able to toss the disc over the roof, and as long as the disc flattens out properly, you can take the obstacle out of the equation.